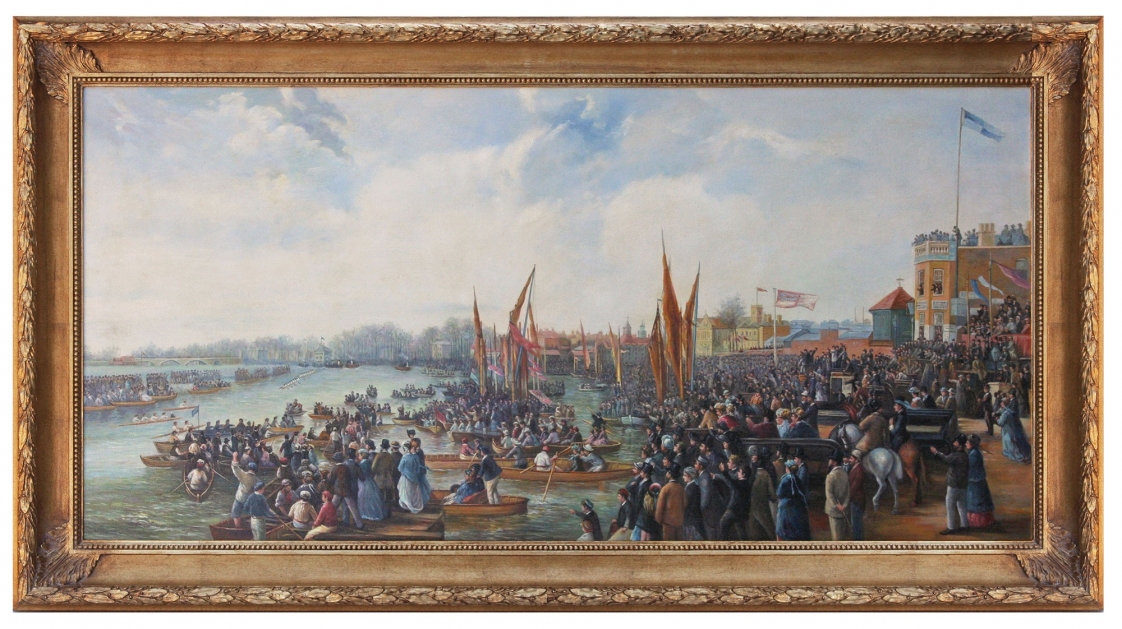 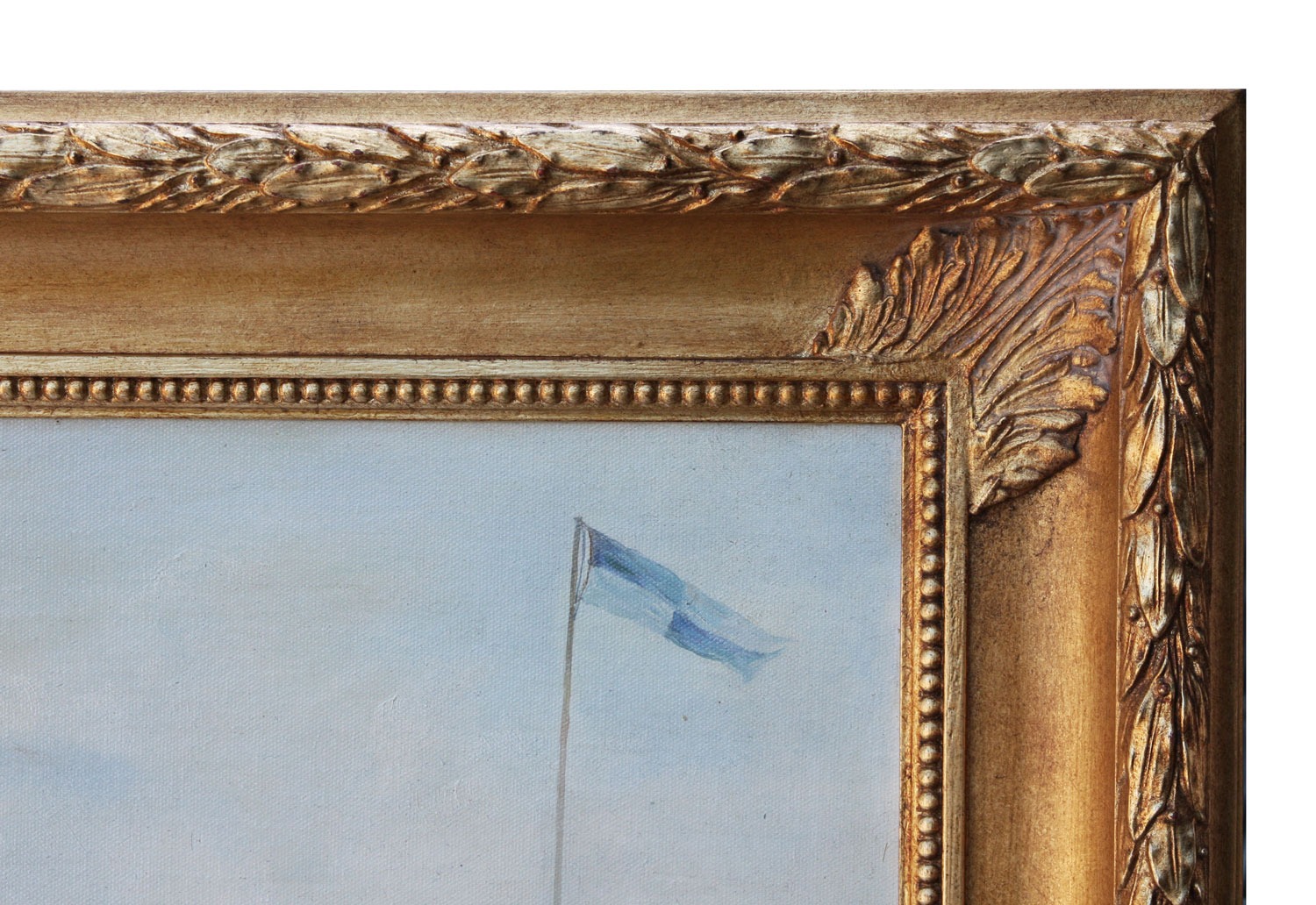 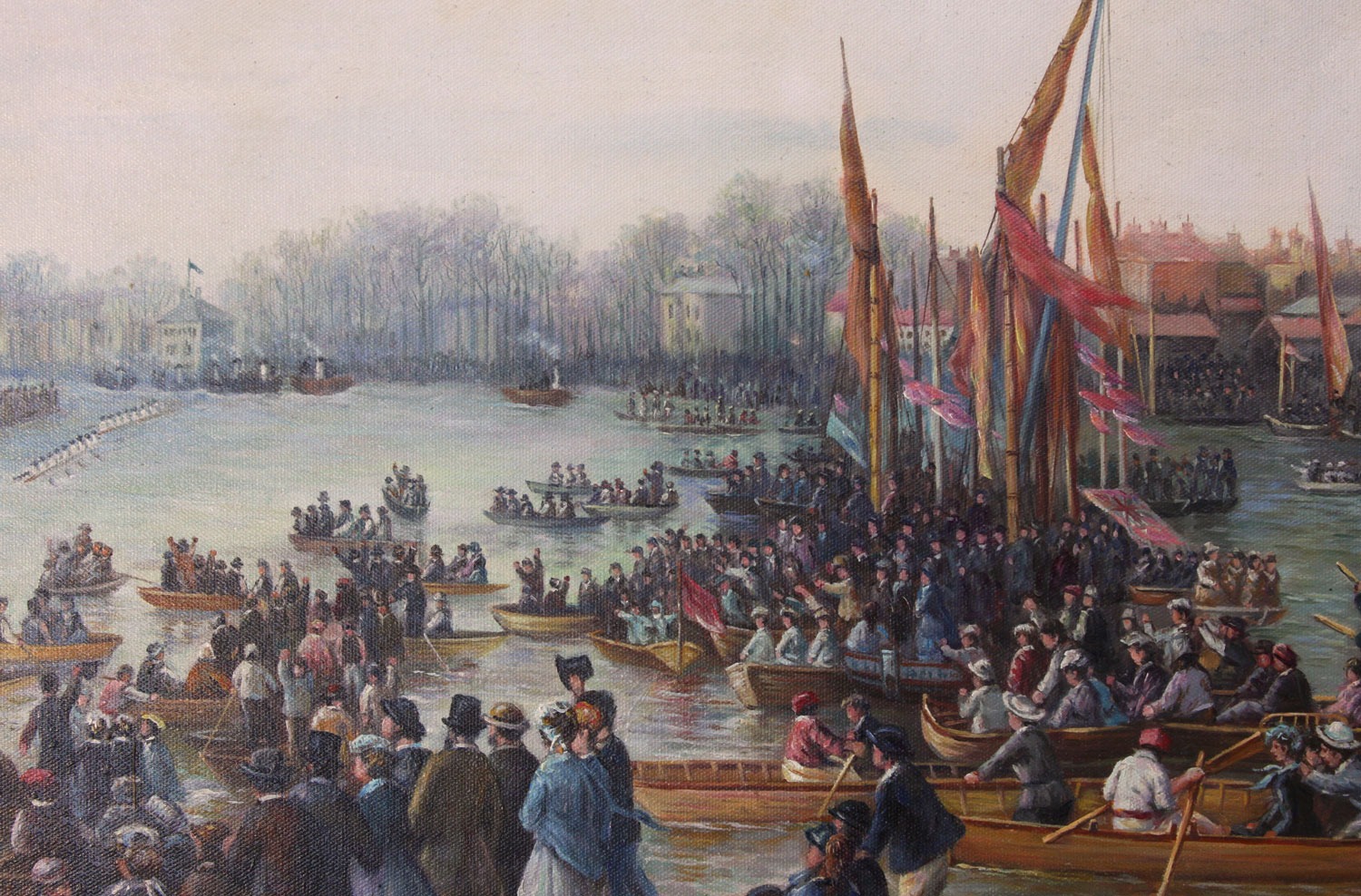 A specially commissioned oil painting, interpreting The Finishing Line Of The Oxford and Cambridge Boat Race at Mortlake by James Baylis Allan.

This 19th Century scene captures the clamour and excitement of the early years of the Oxford and Cambridge boat-race as the two opposing teams reach the finishing line at Mortlake. Everyone is dressed in their finery to crowd the banks and try to gain the best vantage; some are hanging precariously from lamp-posts and from the windows and roofs of buildings, horse-drawn carriages and from boats rowed out into the river from both banks. The crowd surges forward as the race comes to an end and arms and hats are raised in joyous celebration of the victors. Views of the race from this early period in its history are very scarce and therefore the present picture is a valuable historical record of an event that is now a famous and quintessentially British annual occassion watched by many millions of people around the world.

The first boat race was held at Henley-on-Thames in 1829 following a challenge between two Old Harrovian school-friends Charles Merivale a student at St John’s College, Cambridge and Charles Wordsworth who was studying at Christ Church, Oxford. Over the next two decades the races were held irregularly and with no set course and it was not until 1856 that the race became an annual fixture, only interrupted by the two world wars. In Allan’s painting the Oxford team are approaching the winning line; in the 1860s Oxford dominated the races. It has been suggested that the present picture depicts the boat-race of Saturday 13 April 1867 when Oxford won by half a length. The race began at 8.58 am when Oxford won the toss and chose Middlesex station, seen on the left of the painting. Their time was 22 minutes and 39 seconds. The large building on the right is the Ship Inn, flying the flags of Oxford and Cambridge, beside Mortlake Brewery with St Mary’s Church beyond with its white-painted cupola. The view is looking up the Thames towards Barnes Railway Bridge with Duke’s Meadow on the left. A series of similar views were depicted by Gustave Dore in ‘London – A pilgrimage’ of 1872.

James Baylis Allan (sometimes spelt ‘Allen’) was born in Birmingham on 18 April 1803 and died in London on 10 January 1876. At the age of fifteen he decided to make his living as a steel engraver for one of many companies in Birmingham. He attended drawing classes given by John Vincent Barber and became a talented print-maker specialising in landscape views after originals by Turner, Prout and Clarkson Stanfield.

The canvas has been stretched and mounted in a hand made 5 inch Victorian swept frame, finished to a light antique patina.

Oil painting after Captain of the Eleven by Philip Hermogenes Calderon

Oil painting of Hush! (The Concert) after James Tissot