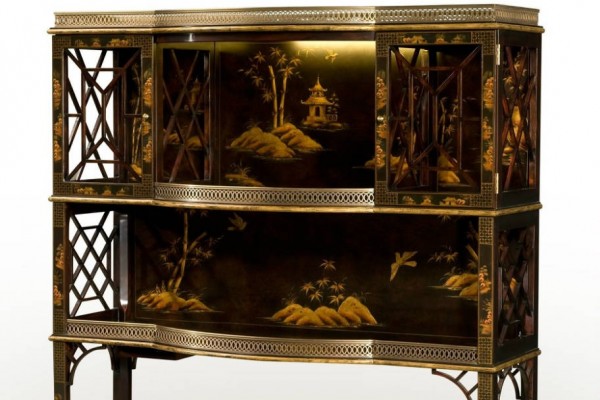 The Art of Chinoiserie

Chinoiserie is the Asian-influenced decorative style which first flourished in Europe during th...

The Art of Chinoiserie

Chinoiserie is the Asian-influenced decorative style which first flourished in Europe during the 17th century, and has gone on to become a staple, striking feature in art, furniture, pottery and more.

The name ‘Chinoiserie’ comes from a French tongue-in-cheek term meaning ‘a little Chinese’ or ‘Chinese-ish’. This denotes the fact that, contrary to common belief, Chinoiserie did not originate in China, but in Western Europe around the time that trade with East Asia began to thrive. With its whimsical, Oriental-inspired depictions and French roots, Chinoiserie is a design style which is truly international. Keep on reading to discover more about Chinoiseries’ rich, illustrious history, identifying features and find out why it has remained such a firm favourite with collectors over the centuries.

History of the Global Phenomenon of Chinoiserie Furniture

The fascination with so-called ‘exotic’ imagery gained prominence throughout Europe when the West first began trading with the Far East, it was around this time that Asian art and culture came to be held in high regard by the upper echelons of society. In the early 17th century, the homes of royalty and aristocrats throughout France, Great Britain, Spain and Italy were decorated with mock-Chinese and Japanese artefacts, lavishly embellished items of chinoiserie and silk upholstery. Chinoiserie even graced the palaces of Louis XV of France and King George IV of England.

The traditional Chinese pastime of drinking tea also became thrived during this era. As one of Asia’s biggest exports to Europe, the beverage quickly became a firm favourite in the UK. The tradition of taking tea in both formal and casual settings lent itself well to chinoiserie and the style was a popular choice of decoration on tea sets, chests, tables and more.

It wasn’t only inside the Georgian home that the Eastern influence could be seen. Landscaped gardens were adorned with Chinese bridges, pagodas and pavilions. These did not tend to be very accurate reproductions, but homages to the pointed, curved and upturned eaves which, to Western eyes, had become synonymous with far-away, exotic lands. Perhaps the most famous of these structures is the Great Pagoda designed by Sir William Chambers for Kew Gardens in 1762. Inspired by youthful visits to Canton, this dramatic, 10-storey pagoda cuts a striking and instantly-recognisable figure to this day.

Although the Oriental style fell out of fashion during the late 18th century, it soon returned to vogue thanks to the flamboyant, fairy-tale tastes of the Prince Regent who would go on to become George IV. The regency era was a highlight for eastern inspired interiors. The prince’s Pavilion in Brighton was the ultimate display of his passion for all things exotic. Once again, music rooms, banquet halls and parlours were lavishly decorated with bamboo furnishings, Chinese-style wall paintings, lanterns and, of course, chinoiserie.

Today, flip through an interior design magazine or scroll through social media to admire luxury properties and you’re highly likely to come across elements of chinoiserie. Some recognisable motifs and features include:

Some of the most popular materials used to create chinoiserie furniture are faux bamboo and lacquered wood. These elaborate works of art require immense levels of skill and dedication and use techniques which have been perfected over generations, one of the reasons why chinoiserie pieces are so highly sought after to this day by collectors and interior designers. To achieve the signature glossy style that chinoiserie is known for, such as the items Brights of Nettlebed has in stock, craftsmen usually coat the wood with several layers of lacquer. Once the shine has taken effect, further embellishment is created by hand-carving the scenes and imagery mentioned above on to the wood and inlaying fine details.

Chinoiserie Furniture at Brights of Nettlebed

If the enduring appeal of chinoiserie would be an ideal addition to your home, then consider coming into Brights of Nettlebed to view our collection of items such as an imbuia chocolate chinoiserie display cabinet with delicately hand-painted interiors above square, chamfered legs with spandrels. We also have a black lacquered wood and silver mounted cabinet, inspired by the furniture within Althorp House and endorsed by the Earl Spencer. Alternatively, our chinoiserie table lamp has a black lacquered column body hand-painted and gilded with a hand-sewn silk shade. These are just a few of the chinoiserie options available at Brights of Nettlebed, all of which would lend themselves beautifully to any traditional, luxurious interior.